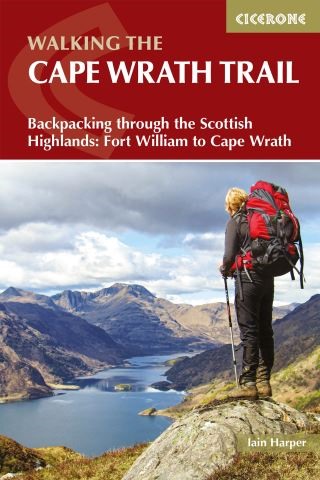 Backpacking through the Scottish Highlands: Fort William to Cape Wrath

This guidebook describes the Cape Wrath Trail, a long-distance trek from Fort William to Cape Wrath crossing the wild northwest of the Scottish Highlands. The route is described from south to north in 14 stages, with 6 alternative stages along the way, allowing for a flexible itinerary of between two and three weeks. A long tough trek with no waymarking, this is for the tried and tested backpacker. The guidebook includes OS mapping, route profiles and detailed route descriptions and gives you all the information you need about accommodation (including hotels, bothies, B&Bs and bunkhouses), campsites and amenities en route, to help you plan and prepare for this epic challenge. The Cape Wrath Trail is regarded as the toughest long-distance route in Britain and offers unparalleled freedom and adventure to the experienced and self-sufficient backpacker prepared to walk for many days in remote wilderness. Travelling through the wild and rugged landscapes of Morar, Knoydart, Torridon and Assynt, it will test the limits of your endurance.

Iain Harper: Iain Harper first set out to walk the Cape Wrath Trail in 2008. As the only time of the year he could do it was December, he gamely set off, only to be beaten back by a severe winter storm. A year later he gave it another shot and finally reached the cape one Christmas Day. Since then he has walked it many times. Having amassed a great deal of research and information he approached Cicerone to completely update and re-write the venerable North to the Cape. Iain has walked extensively in the Scottish Highlands for 20 years but lives and works in the Cotswolds. When not walking he can be found running ultra marathons (he completed the West Highland Way Race in 2011). He is married to Kay.